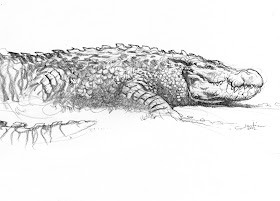 But it can be highly rewarding as well. There is a wealth of information that you glean from direct observation that you just can't get any other way. Like that someone taught that miniature monkey over there how to make obscene gestures and he has been making them at me for the past ten minutes.
But also more useful things like how reptiles breath, how they interact with one another, how they act when they are startled, or how they sit with jaws open to cool off (and not in the hopes that I will carelessly step there.) 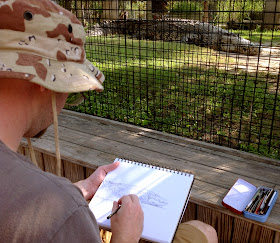 These drawings were done at a reserve called Alligator Adventure, in Myrtle Beach, South Carolina. This reserve is home to one of the largest crocodiles in the world, "Utan." (pictured above)
Utan is 20 feet long and weighs 1 ton.  He is in his own spacious exhibit, because he ate everything else.

He is a genuine monster, a horror from another age. In other places in the world his kind allegedly still kill more humans than any other predatory animal on the planet.

I doubt this chicken wire would really do much if he really decided he wanted to eat me, it looks like it's a screen door he might accidentally trip through on his way to the loo. But as you can see, I'm not worried at all. This is because I am wearing my sweet camo hat, which renders me pretty much invisible to him.

Here we got the head done, and then Utan decided he'd like a swim.  This was inconvenient, but you don't argue with 20 foot crocodiles.

So I moved on to the smaller lizards: 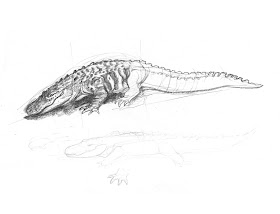 These juvenile alligators, like the juveniles of other species, could not sit still for more than 30 seconds. Drawing them proved fruitless.

Here we were able to catch a tail, and that is all. 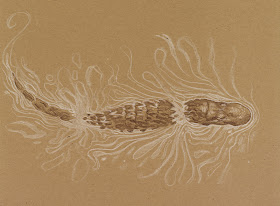 Still there were fascinating tidbits that now get filed away for future projects on enormous, man-eating reptiles. How the water moves around them as they submerge is particularly fascinating. 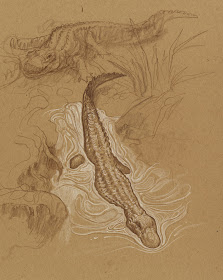 This alligator didn't like the way I was looking at him. That, or he didn't like my sweet camo hat. Either way, he eventually had enough and made a break for it.  But not before I snapped a photo which I would later use to cheat and fill in all the missing details.  Justin: 1, Alligator: 0 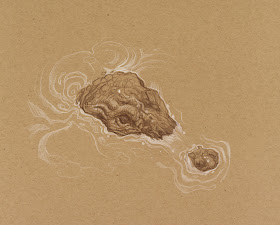